The Troy City School District is pleased to announce Lola Garrigue as Valedictorian and Samantha Cupp as Salutatorian for the Class of 2022. 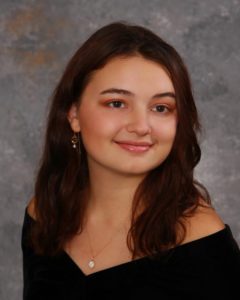 Lola Garrigue is the Class of 2022 Valedictorian with a grade point average of 98.98. Lola is an exceptional student leader, athlete, musician and humanitarian.

She is graduating with an Advanced Regents with Honors and 37 college credits. She has earned a NYS Seal of Biliteracy in Spanish and received the College Board National Hispanic Recognition Program Award. Lola is the recipient of a NYS Board of Regents Merit Scholarship, a Louis Henry Gross Foundation Sponsorship, The Class of ’68 James A. Spain Memorial Award, University at Albany Capital District Leader Award, the United Allies Award, the Elizabeth Buckley award and a THS National Honor Society award. She has been commended by the Capital Region Business & Education Partnership Scholars Recognition Program. As a junior, Lola received the University of Rochester Bausch and Lomb Honorary Science Award.

Captain of the Masterminds Team, Lola was interviewed and subsequently won a spot on a pilot TV game show for Spectrum News. The show featured 3 members of the Troy Masterminds team against a high school team from Palos Verdes, California. Lola was the captain for the winning Troy High School team. She is the President of the National Honor Society, Math Honor Society, Key Club as well as Editor-in-Chief of the school newspaper.

Lola sought out internships, seminars and workshops so that she remained in a learning environment throughout the year including summers. On top of all this, she plays the violin in the school orchestra, is a member of the Varsity Track Team and volunteers for several community organizations including Unity House and Capital Roots.

In the fall, Lola will continue her education at Colgate University. 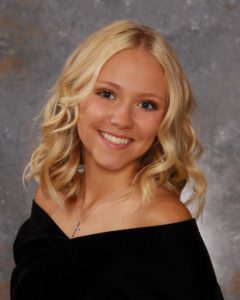 Samantha is the Salutatorian of the Class of 2022 with a grade point average of 98.78.  She has taken advantage of all Troy High has to offer, always taking a rigorous all honors and AP course load.

She will graduate with 34 college credits from Hudson Valley Community College, the University at Albany and Russell Sage College.  As a senior, she was accepted into the New Visions Medical program. Samantha is a recipient of The Guy Enfanto Award, this is awarded to a student involved in school and community activities who plans to attend a 2 or 4 year college or university. She is also the recipient of  the NYS Board of Regents Merit Scholarship for Academic Excellence, the NYS Comptroller Achievement Award and the Scholars’ Recognition Program Award, awarded to a student who has excelled academically and shown leadership potential by serving school and community.

As a junior, Samantha received the R.P.I. Medal. Samantha is involved in a wide variety of activities.  She is a member of National Honor Society, Student Council, Key Club (Treasurer), United Allies Club, participated in concert band and volunteered at Samaritan Hospital. Sam is also a member of the Varsity Cross Country, Varsity Indoor Track, and Varsity Outdoor Track. As a junior she was elected by peers to sit on the Junior/Senior Board.

Samantha will be attending the Stony Brook University in the fall studying Pre-Med.