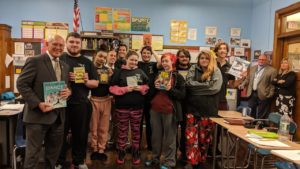 Several months earlier, Spruck found out about the Library of Congress Surplus Books Program, where books are donated to schools around the country from the surplus stock in the Library of Congress. He applied to the program, with input from his students about what sort of books they wanted.  The popular consensus was Young Adult literature and an assortment of fiction and nonfiction topics.

Spruck and his students were surprised and happy when they found out their classroom had been selected as one of the ones to receive a donation of books valued at over $800, delivered by U.S. Rep. Paul Tonko.

They prepared for Tonko’s visit by going to his website to learn more about him and coming up with questions to ask him at the presentation. 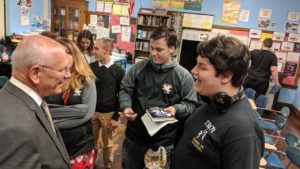 As the class waited for Tonko and his staff to arrive, they had a chance to discuss the benefits of attending School 12’s Alternative Learning Program. Many of the students, who had struggled at Troy High School, are now thriving at School 12 – and not afraid to talk about why they are there.

“The smaller classes help with my anxiety, and the people are a lot nicer here,” said Sabrina Martin.

“It’s easier for me to focus with the smaller classes. The teachers are nice,” added John Chamberlain, Jr.

“I like this school better because all my classes are close.  I’m claustrophobic, and I like not having to travel far down the halls to get to my classes,” commented Kevin Morawski.

“Here, I get treated like I actually matter,” said Hailey Moon.

“I’ve been teaching here for six years, and this is one of the hardest-working classes I’ve ever had,” said Spruck.

The students and staff at School 12 are very supportive of one another, constantly describing the school as a family and a place of security. 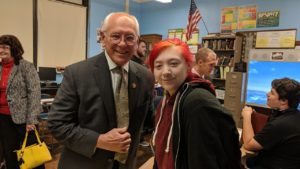 “We’re more motivated to come in because of the great help that we get here,” commented Cora Just. “This school is better for students like us.”

It was this attitude of family and support that the students wholeheartedly communicated to Tonko when he arrived.

Several 12th-grade students and some of the school’s faculty, including principal James Canfield joined the class for the event.

Tonko first thanked the school’s administration for coordinating his visit. Then he briefly explained to the students what the Library of Congress was and how its Surplus Program works.

By coincidence, the Library of Congress facilitator, who worked with Tonko and his administration to arrange the book donation, used to live locally, described by Tonko as “a son of Rensselaer.”

“We have someone on the inside!” a student exclaimed upon hearing that.

Tonko then took a few moments to talk to the students about the importance of the Surplus Program from an educational standpoint. He described it as part of an “education infrastructure,” with a connection to libraries and museums as well as schools.

“We’re here today to show respect to you and to your school,” he informed the students. “In this exchange of books, let’s think about the importance of words. Words can hurt, or they can heal. Let’s focus on words that will build and unite and teach and help.”

Tonko then took some time to get to know the students, asking them their names and inquiring about dream jobs, post-high school plans, and what they liked about their school.

Asking about school seemed to open up a floodgate for the students, as they engaged in conversation with Tonko about School 12. Students shared personal anecdotes about why they were at School 12 and how much happier they were than before. The word “family” was used frequently. They opened up to him about personal issues such as depression and bullying, and how at School 12 those issues were either much easier to manage or gone altogether. 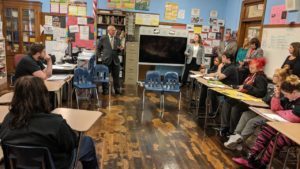 “I feel more comfortable here than anywhere else,” Just said to Tonko. “Now I know who I am. I’m a leader, and I’m independent. They showed me my independence here.”

“I see such bright futures for the students in this classroom,” Spruck told the congressman.

Tonko appeared very pleased to hear such positive feedback from everyone about their educational environment. “Everybody should have a shot at quality education, and it appears that this setting is providing the best for all of you,” he said.

Canfield agreed. “One of the nice things as a principal is the opportunity to see and feel the hope from students and parents coming into this school, when they think, ‘this could work’,” he commented to Tonko later. 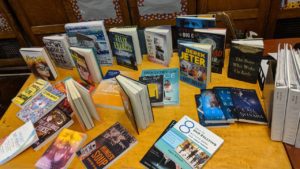 Spruck then guided the conversation into a question and answer session, where the students could ask Tonko the questions they had come up with the day before. Student questions and Tonko’s replies were as follows:

Q: What one thing do you think you’ve done that’s the most important?

A: The one thing I’m still doing is working on climate change, and the one thing I’ve done was to champion the passing of Timothy’s Law.

Q: What inspired you to become the person you are?

A: Faith and family. I have a faith that I follow, and I believe in fighting for the underdog. My family gave me such a strong foundation and unconditional love.

Q: Do you work for the president?

A: No. He doesn’t engage Congress. But traditionally, we work alongside the president. Under the Obama administration, we met with the president regularly.

Q: How do you help veterans and military families?

Q: Did you ever think you’d be the person you are today?

A: I never thought I’d be serving at the federal level. My background is in engineering, and I was content in it, but I felt I had to get “the political thing” out of my system.  When I got involved, I became passionate about it. I wanted to find where I could do the most good, guided by my moral compass.

Q: What was your favorite book in high school?

A: “Silent Spring” by Rachel Carson. It sent such a strong message about helping the earth. Now we’re fighting rollbacks in those principles.

Q: Do you see yourself in the White House at some point in your career?

A: I’m not sure.  I like the give and take in the legislative branch.  When it works, it’s great. I’m very lucky and content to be where I am.  Luck does play a factor in it, though.  But in the executive branch, with all the scrutiny and all the headaches, I don’t know.

When the students were done talking to Tonko, Spruck gave them a chance to look through their new books and choose one to keep if they saw something they liked. The rest will become part of the classroom library, available for the students to borrow whenever they want.

“It’s great to hear from somebody of his stature that he’s fighting for the underdogs,” commented Canfield. “I was overwhelmed by Mr. Tonko’s compassion.”