Troy CSD Math Curriculum Leader Nicole MacNeil was recently featured in the Times Union’s Women@Work STEAM issue for her work as a Troy Riverfront P-TECH teacher. The following is the excerpt from the article. To read the entire article, click here. 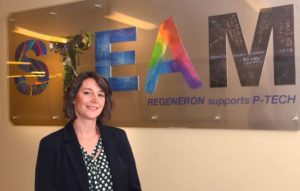 During five summers home from college at Syracuse University, Nicole MacNeil would help her father in his construction business. She would “make things flow,” organizing the process in which everything needed to be done so her dad and his crew could shift to the next step or project without a hold-up.

It was working hard, following a step-by-step process that MacNeil loved to do. It allowed the business to see what its future options were.

Today, MacNeil is the math curriculum leader for the Troy City School District and an instructor through the district’s Riverfront PTECH school. In both of those roles, MacNeil said her job is to lay out stepping stones for her students in all grades and experiences to give them as many avenues post-graduation as possible.

“I want them to graduate high school not only with a degree but with a skill set that enables them to be successful in whatever they want to do,” she said. You want to go to a four-year college? Great. You want to go into a trade, great. I come from, my family most of the people in my family work in the field of construction. They are extremely hard workers and extremely intelligent, and I think it’s extremely valuable work. And a lot of our students might love to do that and want to do that and that’s wonderful and I want them to do that. But I want them to graduate and have options.”

Teaching, much less teaching mathematics, was never on MacNeil’s to-do list growing up. A graduate of Shenendehowa High School, she went into SU as a music major, but ended as an economics and philosophy double major, minoring in math. When she left the university, she spent a year in Utah skiing, but moved back to the Capital Region thinking she might want to teach. She signed up to be a substitute, and found she really loved it.

Whether it is her two daughters at home, or the students she oversees, MacNeil said she loves to show how math can fit into everyday life. 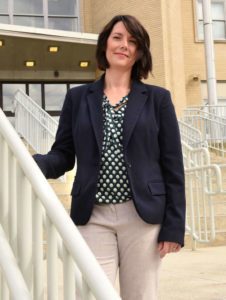 “Not every student is going to be an engineer, but I try to give them specific examples depending on the student,” she said. “Like, ‘OK, in football, do you have weightlift training? When are you going to be lifting weights on the field? You’re going to use those muscles to do better on the football field.’ That’s what doing some of these math problems is like. We’re exercising our brain so that you can do this better.”

In the PTECH program — the focus of which is on STEM subjects, though it includes classes like living environment and English language arts — students who pass the application process and complete the curriculum during their high school years graduate with an associate degree from Hudson Valley Community College. But the program is less about finding the highest grade-getters, MacNeil said. Some students will come in having gotten high-90s grades in Regents exams’ others needs a calculator to add, subtract, divide and multiply.

Teachers tell middle school students about the PTECH program and its project-based learning. Developing the scenarios that create those projects is one of the more fun parts for MacNeil.

“The teachers involved with the program, they’re in it because they want to be involved,” she said. ” The teachers are like a family, and the greatest things happen when we’re just sitting down having lunch … All of a sudden we have a crazy science fair project going on involving students and teachers.”