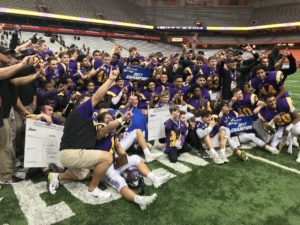 The Flying Horses are the first team in Section 2 history to have two back-to-back undefeated seasons (26-0) capped with a second state championship win. This season, the Flying Horses were ranked No. 1 for all 13 weeks. Times Union

Troy won as it has the past two years: On the legs on Dev Holmes and Joey Ward, and the arm of Joe Casale. Ward had three touchdown runs and another through the air, and Holmes had two TD receptions. In addition to his three touchdown tosses, Casale ran for a two-point conversion. Daily Gazette

In the second quarter, Troy up 6-0, Joe Casale looks to Dev Holmes, who breaks a couple tackles and goes 58 yards for the score. Troy with a 14-0 lead.

Fifteen seconds left in the half, it’s a one-score game, and Casale fires to Holmes for another touchdown. Flying Horses with a 20-7 lead at the half.

Third quarter, more from Troy, as Joe Casale has to scramble and dumps it off to Joey Ward. He powers his way in for the score and Troy takes a 28-7 lead.

Lancaster makes it a game in the fourth, as Ryan Mansell airs it out and connects with Kyle Backert on a 73-yard touchdown.

But Joey Ward seals it for Troy, bouncing off guys left and right with a ridiculous 15-yard touchdown run. Spectrum News

Members of the Troy High School varsity football team were sent off in style Sunday morning as they took the final step in defending their state championship.

Fans of the Flying Horses, including school administrators, faculty, students and family members, joined the school’s marching band and cheerleaders in wishing players well as they got on a bus to the Carrier Dome in Syracuse. Troy Record