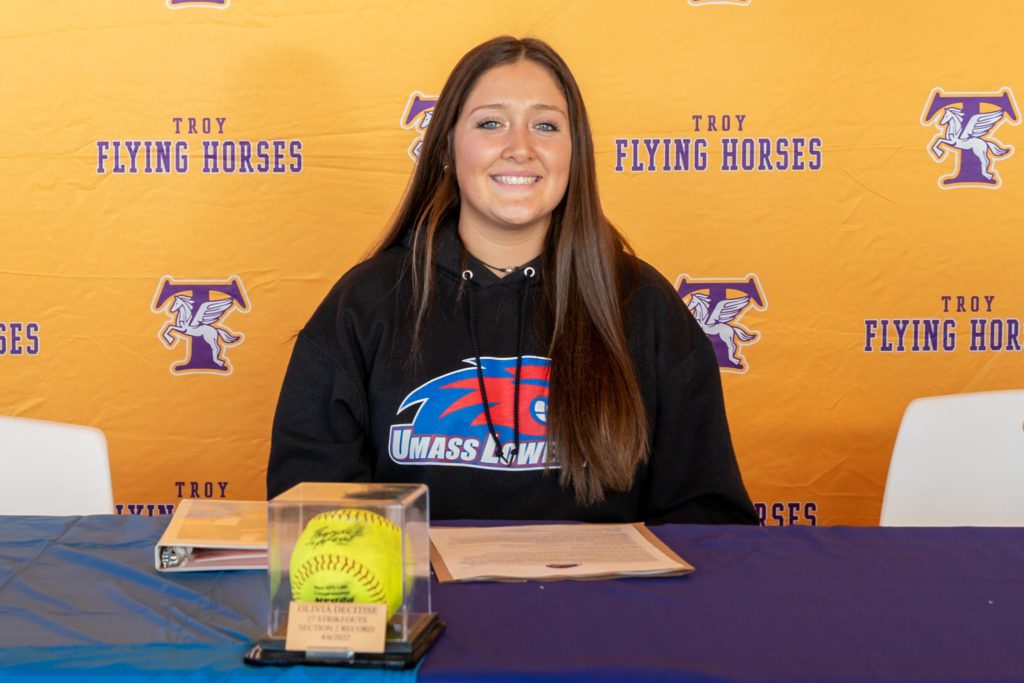 THS Senior Olivia Decitise pictured at the signing ceremony for her national letter of intent on November 9.

On November 9, Troy High Senior Olivia DeCitise signed a national letter of intent to play Division I softball at UMass Lowell next year in a signing ceremony in the Troy Room at Troy Middle School.

In July, DeCitise announced her commitment to the national research university on social media.

“I am extremely excited to announce that I will be continuing my academic and athletic career at UMass Lowell! I would like to thank my family, friends, and coaches who have helped me fulfill my dreams of playing D1 softball! Go River Hawks!” she said.
DeCitise was named Times Union Large-school softball Athlete of the Year, Suburban Council Pitcher of the Year and was highlighted several times in the Times Union’s “Best of the Week in Section II” this season as she helped lead the Varsity Softball team to a 20-2 season that ended in the state semifinal game in June. She ended the year with an 18-2 record, an ERA of about 1.20, 295 strikeouts and a batting average over .400. In April, she struck out a Section II record 27 batters in a 12-inning game with Burnt Hills-Ballston Lake. She has a streak of more than 10 strikeouts per game going back to Spring 2021.
Aside from softball, DeCitise is also a top performing bowler – averaging 213 on the Troy HS boys’ team (there is no girls bowling team) and earning a spot on the girls’ state team. She was also named girls’ bowling athlete of the year for this season.
Tweets by TCSD