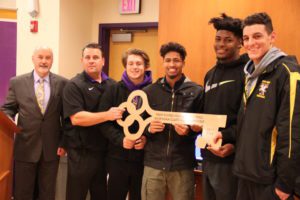 During the January 3 Board of Education Meeting, the 2017 Troy High School Football team was honored by several area politicians for their second consecutive state championship win in November. City of Troy Mayor Patrick Madden also presented the key to the city to the team in recognition of their win.

Mayor Madden discussed team work and the pride they’ve brought to the City.

“You each have a role to play as a member of the team,” said Madden. “Many of you probably never touch the football in every game that you played and yet you were still essential to each and every victory because you each played a part. I think that’s a lesson you need to take through life. As we set aside our own personal egos and we work together for the common good, there’s no telling what we can accomplish. So, congratulations! You’ve made us all proud.”

Head Coach Bob Burns thanked the players, the coaches, the Troy CSD administration, City Council and the Board of Education. 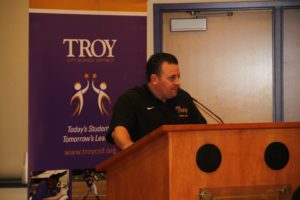 “The things you see on Friday nights and Saturday afternoons from time to time… a lot of work goes into it,” said Burns. “The kids bust their humps twelve months out of the year as well as the coaches.”

“You didn’t really win this championship on game day, you won it during practice, every day grinding it out and getting that job done to learn those plays,” said McLaughlin. “You did it on the practice field.”

“Some of you are going on to college or work, this is your moment. Remember it, believe it. Carry it on for life. Your teammates you will remember for the rest of your life. Remember that teamwork and practice it in live, you’ll go far,” said Mantello. 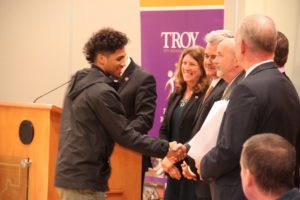 The students and coaches were individually recognized and received certificates for their accomplishments from Superintendent John Carmello, the guests and Board members.

Carmello also addressed the students congratulating them on a job well done and thanking them for bringing so much pride to the District.

“I sent a text to my son on New Years Day about goals,” said Carmello. “It was a quote that said, ‘Some people dream of success, other people wake up every morning and make it happen,” and the Troy High football team wakes up every morning to make sure they’re successful. So, I’m proud of you for that and congratulations for all you’ve done.”