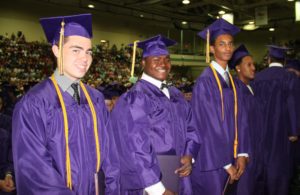 Troy High School was nationally recognized as a Bronze Medal Winner by U.S. News & World Report in their latest rankings of the best high schools in America. Troy High received its high rankings for reading and math proficiency, including those rates for disadvantaged students. It was also included as one of the nation’s best high schools due to its current graduation rate that exceeds both state and national standards.

The U.S. News rankings include data on more than 22,000 public high schools in 50 states and the District of Columbia.