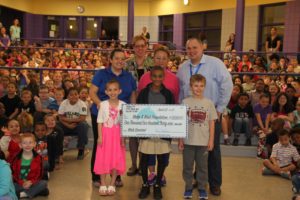 On April 27, the students of Troy’s School 14 presented a check to the Make-A-Wish Foundation in the amount of $1,539. Students raised the funds themselves by collecting spare change and by asking for donations. Students also had an opportunity to meet the child whose wish was granted by the money they donated the previous year.

This is the fifth year School 14 has donated to the organization, one that grants the wish of a child diagnosed with a life threating medical condition. Last year, the students raised $2,028. The donation was given to Illiana Coleman from Troy. She is battling Osteosarcoma, a type of bone cancer. With the help of Make-A-Wish and School 14, she was able to buy her new best friend, a little dog she named “Waffles.”

The exercise is part of character education at School 14 that teaches students about caring for others. Some 2nd Grade students went above and beyond collecting spare change. Nino Pellicano and his family raised $145 and once again this year, Alexis Valigorsky donated her birthday money – a total of $330. When asked why she did this, she responded, “I like helping people.”